The young bride abhors all cookies and sweets; whence came the candy wrappers beneath her sheets?

The literal meaning of Hokol khaina ghore, bhiknnamnim bhorlem van!  is “The bride eschews jackfruit arils; (but) the mortar got filled with jackfruit seeds”. 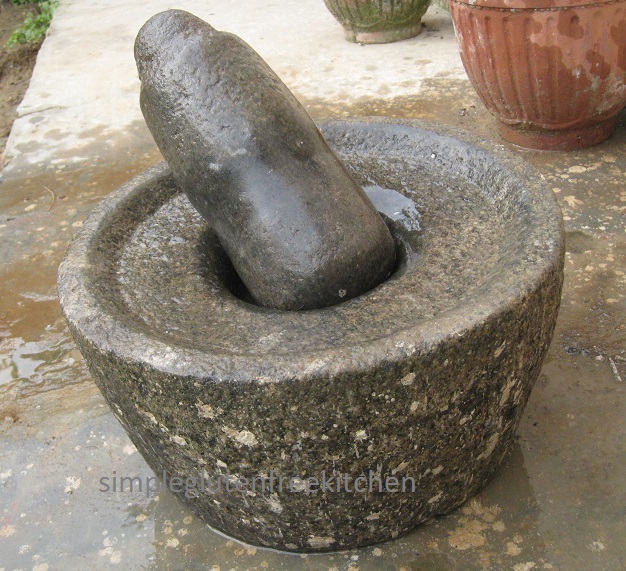 The Goan Van and Ghantthnno (Mortar and Pestle)

Now that calls for a great deal of explanation. First, the Konkani word for jack fruit and the meaning of van . Jack fruit in Konkani is ponnôs. Van is the Goan version of mortar, which is a stone bowl used for grinding. The bowl, however, isn’t like most other bowls. The area of the mouth of the bowl is much less than the rest of the area of the mortar, for surrounding the mouth of the bowl is the platform or bank on which the stuff that is ground gets collected. The grinding is done by means of the ghanttnno  or the pestle. Since the Goan pestle is heavy, it isn’t lifted and struck in order to do the grinding like most other pestles. Instead, its broader end stays at the bottom of the bowl while its upper narrower end is held by hand and turned round and round above the bowl. As the top of the pestle moves around, the bottom grinds the matter as it rotates, rubbing the bottom and sides of the bowl with the matter in between.

After the grinding is done, the pestle is lifted out of the bowl of the mortar, the ground matter is removed, and the mortar and pestle are washed by pouring water on them (neither is light enough to be taken to the sink to wash) and collecting the water from the van with a shaved kott’tti   (coconut shell). The pestle is then placed either as shown in the picture above or over the flat part of the van, either horizontally or leaning against the wall behind.

Now imagine a new Goan bride of the old era who is very fond of jackfruit but too shy to admit it. When she is offered jackfruit, she says that she doesn’t eat jackfruit.  All the same, since a young bride is expected to be shy and perhaps even to coyly refuse what she is offered, they place the bowl of jackfruit by her side as she sits on, or beside, the van. Then, while folks are engrossed in their conversation and no one is observing her, she quietly picks up the ghore (jack fruit arils or the flesh of the jack fruit) and goes on eating them all, one by one.

The ghore are usually offered not pitted but along with the bhiknnam (jackfruit seeds), which means that while one eats the ghore, one would also need to dispose of the seeds. So as the newly wed bride goes on eating the ghore, the bhiknnam get accumulated in the bowl of the mortar (van) beside her (or perhaps behind her, if she is sitting on the van itself).

Notice also positioning of the verbs khaina (doesn’t eat) and bhorlem (got filled). The normal practice in Konkani is to place the verb last in a sentence. That doesn’t happen in this proverb, but instead the verb khaina is placed before the object, ghore, while bhorlem is placed before the subject, van, and bhiknnamnim (the adverbial instrumental of bhiknnam), which is normally put after the subject and just before the verb, is placed first. This is done for a special effect like emphasis. We have come across another case like this: in Fest kôrta ganv, we have the sentence ending with, instead of beginning with, the subject, ganv, and the verb preceding it, instead of ending the sentence. It is similar to the difference between “The hammer came down”, and “Down came the hammer”. The two obviously don’t have the same feel.

This proverb about the bride, as you can see, is not one that admonishes or instructs, but is merely descriptive of the shyness (or perhaps coyness) of a young bride. It is usually quoted in a lighter vein when similar situations occur.